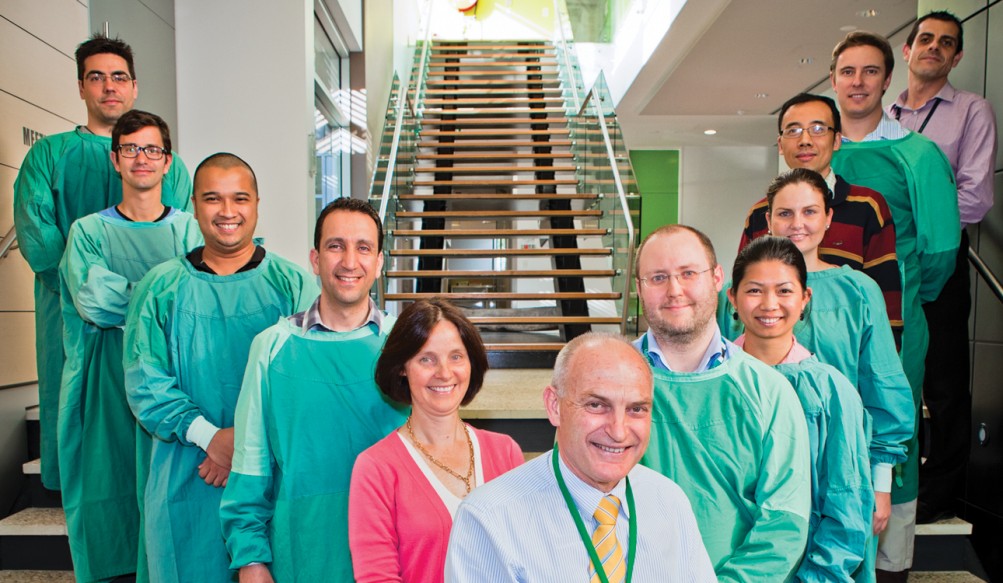 EXCLUSIVE: A 20-strong team of medical researchers led by Professor Derek Hart at the ANZAC Research Institute at Concord Hospital is on the cusp of being able to produce an anti-cancer vaccine.

All that is required is $5million for ‘Phase 1’ to make a ‘first in man vaccine’ using the antibody, test it and conduct clinical trials. The potential outcomes for mankind are mind-boggling.

Medical research can be a minefield. Terminology, back history and, greatest of all, the risk of uncertainty, can leave many bewildered.

However, after talking with the Oxford-educated Derek Hart, who leads the ANZAC Research Institute at Concord Hospital about the enormity of his research, I posed the ultimate question: was he talking about the potential of an anti-cancer vaccine?

His answer was simple and direct: yes.

A cure for cancer is not something that anyone should take lightly, which is why it is important to understand Professor Hart’s history and mission.

It was back in 1973 that Ralph Steinman discovered the “dendritic cell”, which determines how molecules on the surface of white blood cells communicate with each other, and then reject or accept transplanted organs and respond to diseases like cancer.

However, it would be another six years before Steinman’s discovery was taken seriously when Professor Hart found the same cell in transplanted heart tissue.

The two teams of researchers spent the 1980s convincing “the disbelievers” in the medical community of the importance of dendritic cells as prime communicators with other cells.

“Dendritic cells are a sub population of white cells. They are the key to our research because they activate the body’s natural defence against illness and disease – the immune system,” Professor Hart explained.

One of the reasons cancer is able to grow and spread around the body is because cancer cells are very good at hiding from the immune system.

“During our research at Oxford, we showed that the dendritic cells were important in transplant rejection,” Professor Hart said. “I developed a hypothesis back then.” (which he still has). “If these are the cells, which initiated a direct immune response – then if we figure out how they work, then we might be able to stimulate them for vaccination purposes.”

“Dendritic cells call the shots throughout the blood system. Think of them as the ‘Generals’, instructing the sergeants and soldiers. We found a way to identify the Generals and isolate them,” Professor Hart says.

In the 1990s Professor Hart and his wife Associate Professor Georgina Clark pioneered more research in Christchurch, then Brisbane, looking at the molecules on the surface of dendritic cells.

“These cells can tell the good from the bad and can also communicate with other cells – be they to increase or decrease immune response. By 2000, the work had got to the stage where we could apply what we’ve found out for diagnostic and therapeutic purposes. We were, basically, putting the hypothesis into practise after 20 years of work. This is the fun bit!”

What follows is another huge question.

“Q: Are you telling me that only $5million stands between you and a cure for cancer?”

When the new Bernie Banton and ANZAC Institute building was opened in 2010 at Concord, the opportunity to found the Dendritic Cell Biology and Therapeutics Group and to enable it to work closely with collaborator, Professor Ken Bradstock from Westmead and others at Prince Alfred Hospital was realised for Professor Hart.

In medical lingo, the group’s focus on dendritic cells is a particular emphasis on the translation of scientific discoveries around surface molecules into diagnostics and therapeutic outcomes.

“If we understand how DC initiate or suppress the immune response, then we may be able to increase their activity for (cancer) vaccination and suppress their activity to facilitate transplantation and control auto immune disease,” says the Group’s Business Manager, James Zagarella. “I believe it is a story worth telling the community about.”

A story worth telling

Currently, drug treatment for transplants suppress the entire immune system, which leaves the patient vulnerable to infection, but there is a new methodology on the horizon.

“Our approach only targets dendritic cells. We’ve made an antibody that removes the activated dendritic cells and have shown that this works as a completely new approach to Immune Suppression. We are looking at the anti-bodies in therapeutic and diagnostic practise,” Professor Hart says.

“We’ve developed a way to do that. We’ve tested it and it works on human cells in mice and mice transplants. Bringing the work together across three major hospitals is a significant achievement and we have built a stunning team of young doctors and researchers.”

The program at Concord is one of only a few in the world to go from research through to clinical trials.

Phase 1, will cost $5 million over two years includes making a safe drug from the antibody (named 3C12 or versions of 3C12). Clinical trials and trials for toxicity and regulatory requirements are also a part of this phase. Phases 2 and 3 look for efficacy and document outcomes in patient trials and provide proof positive.

“We don’t have the money for Phase 1. It’s a big block for us,” Professor Hart quietly says. “Funding to move from fundamental discovery to clinical practise is very limited in this country.”

“You want your research to reach an outcome for people. The most constructive thing I can do is medical research for future remedies.”