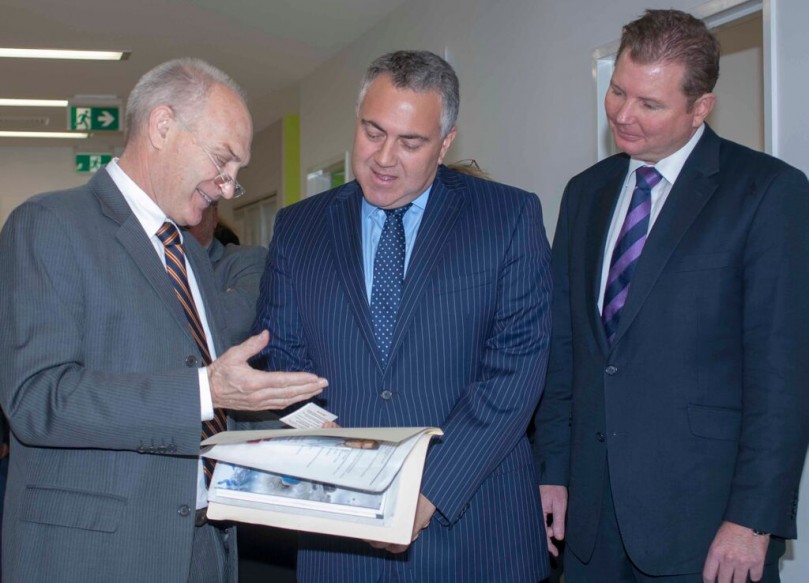 TREASURER Joe Hockey has declared that Australia will become a global leader in medical research following his visit to view first-hand the ground-breaking research being conducted by Professor Derek Hart at the ANZAC Research Institute facility at Concord Hospital.

The capability for Professor Derek Hart and his team at Dendritic Cell Biology and Therapeutics Group (DCBTG) to deliver a world-wide boost for a cure for cancer is another step closer following the visit.

Accompanied by the Member for Reid Craig Laundy, Mr Hockey declared the Group’s work to be “hugely impressive”.

“This is exactly why we want to set up the Medical Research Future Fund within eighteen months for facilities such as this,” Mr Hockey said of the facility. “Australia has the brain power and the capacity to conduct world class medical research.”

“The Medical Research Future Fund will provide at least $1bn a year on a sustainable basis for medical research, helping clinical trials and facilitating the commercialisation of Australian innovation, the like of which is taking place right now at the ANZAC Research Institute in Sydney’s inner west.”

“We just have to go the extra step. Now is the time to put our shoulder to the wheel,” Hockey said.

During a tour through the facility, Professor Hart explained the work being done to fight blood cancers (acute myeloid leukaemia) by isolating the dendritic cells in the blood stream, to which Mr Hockey said, “There’s a lot who want my blood,” in a light moment.

Professor Hart’s Group is internationally recognised as a leader in the field and includes Hart’s Associate Professor wife, Georgina and a brilliant 20-strong team.

DCs are unique subsets of white blood cells that are responsible for initiating and directing immune responses. Professor Hart’s team have proven that these cells can be isolated, taken out of the blood stream and then be retrained before going back into the blood stream to fight cancer or accept transplants.

Phase 1 of the human clinical trial is approaching at a cost of $5million, which still needs to be raised. Reid MP, Craig Laundy has been actively campaigning to raise awareness of Hart’s work saying to a packed press conference after the tour that, “the joy of today is I get to tell everyone else what we’ve known for a while.”

“This visit has highlighted the remarkable, world class research that we are undertaking in Australia and the importance of appropriately supporting research centres like this,” Mr Laundy said.

“By establishing the world’s biggest medical endowment research fund and backing the objectives of facilities like the ANZAC Research Institute, this Government is ensuring that Australia is in the best possible position to make discoveries that will potentially eradicate a number of diseases that currently take such a toll on our communities.”

Last year the Bendigo Bank established the ANZAC Research Institute Medical Appeal where any organisation or person can donate at any bank branch or online. The Burwood Rotary Club nominated the Appeal as their major fundraising target for 2013/14. Current President Sana Kamalesan will present a substantial cheque to Professor Hart at this year’s Changeover Dinner on June 30.

The $150,000 inner-west target will provide one more researcher and equipment. Bendigo Bank’s Senior Community Strengthening Manger, John Chandler says the Appeal is an Australia-wide project for the bank and that anyone can be involved.“We are delighted to be associated with this wonderful cause,” Mr Chandler said.