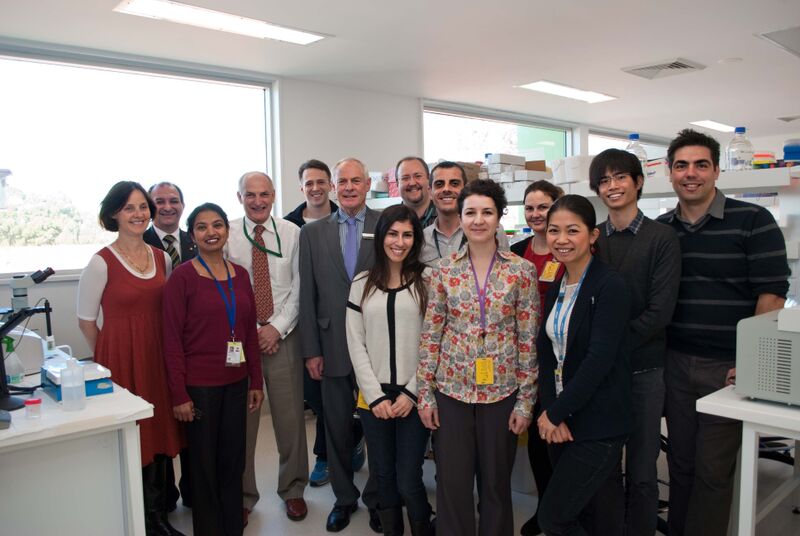 Launch Speech by Burwood Scene Editor Belinda Noonan on 29 May 2013.

I met Professor Derek Hart at Concord Hospital eight months ago when he had decided that the time had come to tell the community what his Group at the ANZAC Research Institute were doing and to seek support.

Professor Hart’s research has been based on the dendritic cell, a new class of white blood cells in the immune system that “talks” to and commands other blood cells. They are the Generals in the blood stream that decide whether to allow or reject drugs and cancers.

A long time into the interview as I was struggling to come to grips with what he was telling me – I finally asked the big question. “Are you talking about the potential of an anti-cancer vaccine?”

His direct answer: “Yes” I absorbed the enormity of that then asked: “Does that mean there would potentially be no need for chemotherapy?”

Professor Derek Hart is a Rhodes Scholar and his work is focussed on blood cancers. It was his research at Oxford that confirmed the discovery of the dendritic cell – by American – Professor Ralph Steinman, who was awarded a Nobel Prize in 2011, two days after his death from pancreatic cancer. They were collaborators.

the past two years, Professor Hart, his Associate Professor wife, Georgina and their 20 strong brilliant team at Concord have proven that these cells can be isolated – taken out – retrained – and put back into the blood stream to fight cancer or accept transplants from the inside.

His “Group” are rapidly approaching Phase 1 of human clinical trials. This will be one of the few medical breakthroughs in history to go from discovery to clinical trial under the one team and the collaboration extends to Concord, Royal Prince Alfred and Westmead Hospitals.

I left that interview shell-shocked as the implications for mankind dawned. If I had $5million, I would have gone straight back with a cheque and said “take it – get on with it, thank you very much”. Reality kicked in! What can I, with one community newspaper do other than print a few stories?

The task was to start with a group of people who could help and advise. One of those at an early meeting was the Member for Drummoyne, John Sidoti.
Then Bendigo Bank – the community bank, came on board.

Derek and Georgina Hart live in the inner west, their daughter goes to school in the inner west. It is fitting that here – tonight – in this room – for the 2013 Inner West Local Business Awards with all the good and great business owners, leaders, elected officials, council representatives and sponsors – and with the blessing of Steve Loe, that I am humbled to announce the launch of the ANZAC Research Institute Medical Appeal.

In its largest ever community project Australia -wide, Bendigo Bank will begin to promote the appeal through every branch in Sydney with an achievable starting target of $150,000, before expanding nationally for the total target of $5million. We are seeking your support. With posters in your business, by supporting or hosting fund-raising events, by providing advice and ideas. By being involved.

Burwood Scene will do two things.

1.Next Wednesday’s paper on June 5 will announce the Bendigo Bank partnership with the ANZAC Research Institute on the front page. The 2013 Inner West Local Business Awards Winners Feature will be brought forward to this issue and 10% of every ad placed by tonight’s winners will start the Appeal.

2.The July 3 Burwood Scene will announce – on the front page again and with a special feature inside – the public launch of the Appeal and how to donate or be involved. 20% of EVERY ad booked for July 3 with the words “We support the ANZAC Research Institute Medical Appeal” will go directly to the appeal.

Ladies – Gentlemen. Can I ask you to put your hands together and welcome, on behalf of Professor Derek Hart, the manager of his Group, Mr James Zagarella. Can I also ask you to welcome the Bendigo Bank Senior Manager of Community Strengthening, Mr John Chandler.

I invite you all to have a word tonight with these two gentlemen and on your tables are brochures outlining Professor Hart’s work, information from Bendigo Bank and also a Burwood Scene card where you can register your interest. I have three lovely young women here tonight, Emily, Bridhe and Mel who can also assist you.

Thank you for listening and let’s get on with the celebrations.